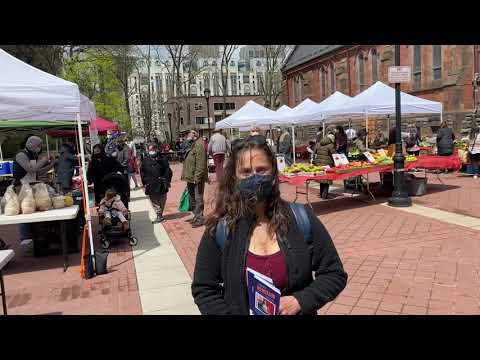 Rebecca Weintraub is a candidate to represent Roosevelt Island and the Upper
East Side as
Democratic Party 76 Assembly District Part A Leader.
Last Saturday, April 16, Ms Weintraub was at the Roosevelt Island Farmers market
meeting and speaking with residents about her campaign and local issues of
concern.

A great day campaigning at the Roosevelt Island Farmers Market with
@tricia4nyc
and an amazing time at the grand Reopening of the absolutely incredible
Roosevelt Island Youth Center with
@CarolynBMaloney
and @kallos.
pic.twitter.com/J0oW1HtxeM

As your District Leader, Rebecca will work to ensure that the New York County
Democratic Party remains transparent, accountable, and responsive to our
community’s needs. She will advocate for building a diverse and inclusive
county leadership structure that stays true to our Party’s core progressive
values. The position of District Leader is especially important in Part A of
the 76th Assembly District because Roosevelt Island is controlled by the New
York State government through the Roosevelt Island Operating Company
(RIOC)….

According to Manhattan Democrats:

From part one of Paul Newell’s “What’s a District Leader?“…

After countless requests, the Excelsior issue you’ve all been waiting
for…

More info on Ms Weintraub availablle at her website.

Esther Yang is also running for Democratic Party 76 Assembly District Part A Leader. Meet her too.