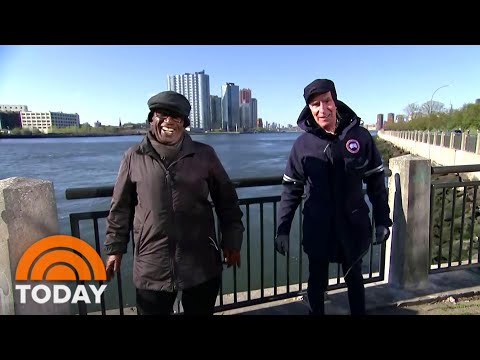 Roosevelt Island’s Wildlife Freedom Foundation (WFF) founder Rossana Ceruzzi and WFF volunteers were invited to participate in the Earth Day celebration and joined in to help clean up Southpoint Park.

and then took a Citibike ride at the Tram Plaza – watch out for the cracked street and potholes guys.

I was watching how Al and Bill turned 180 degrees just before going under the Ed Koch bridge on the East side. They could not make that choice! Both the sidewalk and the road are in horrible shape at that spot.  It was kind of funny to see these bikers violating our invisible road signs and going against traffic.

.@alroker and @BillNye take a ride on the Roosevelt Island tram in New York City and have a conversation about the importance of clean air. #EarthDay pic.twitter.com/PGOXJrSxoc

Happening SAT 4/24 10am to 1pm #EarthLove day on @Rooseveltisland Walk on by and join us on the meditation grassy lawn across from the historic Blackwell house. Try Plogging or the book exchange. #EarthDayEveryDay #Earthlove #RooseveltIsland pic.twitter.com/axCGXZ1nQ9