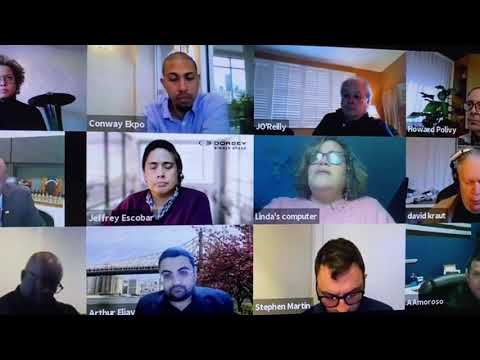 The Roosevelt Island Operating Corp (RIOC) announced the appointment of
Shelton Haynes as President and Chief Executive Officer during March 16
RIOC Board Of Directors Meeting (video of meeting here).

The Board of the Roosevelt Island Operating Corporation (RIOC) appoints Shelton J. Haynes as President and Chief Executive Officer of RIOC – hooray for Mr. Haynes! To read more about it, visit https://t.co/LIS3i4LIQ0 pic.twitter.com/5GsOBScnBf

Mr Haynes has served as the RIOC Interim President/CEO since June 2020
following the abrupt and controversial firing of former RIOC President Susan
Rosenthal, which is currently the subject of a wrongful termination lawsuit by
Ms Rosenthal.

Mr Haynes was the RIOC Vice President of Operations since 2016.

RIOC Board Chair Linda Manley reported to the Board Members during March 16 meeting:

The Executive Chamber is the Office of NY State Governor Andrew Cuomo, also known commonly around RIOC as “The Second Floor”.

I would note that I don’t disagree with anything you said about Shelton. Shelton is prepared to do this job.

This board did not do a search as is recommended in our bylaws. Such a search would …  be very difficult at this point in time.

I also note that the Executive Chamber has recommend Shelton to us and I see no reason to disagree with that recommendation but it did come from outside. The Governor does hold a seat on this Board in fact if not in law and we can proceed from there….

Here’s video of discussion including remarks from Mr Haynes upon being approved as the new RIOC President.

Thank you all for the overwhelming support with calls, emails, text messages, social media posts and etc. I am truly honored and humbled at being appointed as President/CEO of the Roosevelt Island Operating Corporation. We have such a dynamic group of professionals that are committed to excellence. I am eager to continue to build upon our mission while working with the community to enhance the quality of life on Roosevelt Island.

And a press release from RIOC:

The Board of Directors of the Roosevelt Island Operating Corporation (RIOC) today voted to appoint Shelton J. Haynes as President and Chief Executive Officer, a role in which he has been serving in an acting capacity since June of last year. Having first joined RIOC in April 2016 as Vice President of Operations, Mr. Haynes oversaw the Island’s day-to-day functions as well as management of the Corporation’s various administrative, operational, and planning departments, including the Public Safety Department.

When Mr. Haynes was promoted to Chief Operating Officer, his vision was to provide strategic planning and create a results driven environment. He placed emphasis on enhancing the Corporation’s overall efficiency and internal subject matter expertise. He invested in critical training, redefining agency positions, recruiting top notch professionals, creating checks and balances, working tirelessly with the public, setting measurable goals with key performance indicators, and lastly, enhancing technology to streamline business processes. More importantly, he is committed to creating a culture where everyone is working toward a common goal.

Mr. Haynes’ most visible impact on the Roosevelt Island community has been his leadership in dramatically increasing the scope of RIOC’s Capital Program. From 2013 to 2015, before Mr. Haynes arrived, RIOC spent an average of $4.5 million per year on capital projects. From 2017 all the way through 2020, the average amount spent on major capital projects such as the landmark restoration of Blackwell House, a newly renovated youth center, and the seawall railing replacement, has more than doubled to over $14.5 million per year. Prior to the COVID-19 pandemic, for FY 2020-21, Mr. Haynes was instrumental in working with the RIOC Board of Directors on the approval of $40 million towards the Capital Program.

HCR Commissioner RuthAnne Visnauskas said, “We are so pleased to see Shelton Haynes take the helm as President and CEO of RIOC after four years of outstanding service as Chief Operating Officer and then Acting President. Shelton’s extensive experience and expertise with strategic planning, corporate operations and management will build upon RIOC’s success and move the organization forward with fresh ideas. We look forward to continuing to work together with Shelton for the benefit of all who call Roosevelt Island home.”

“I’m honored by the opportunity to serve such a diverse, engaged and passionate community alongside a team of extremely dedicated and talented group of professionals.” said RIOC President & Chief Executive Officer, Shelton J. Haynes. “I thank Governor Cuomo, RIOC Board Chair, RuthAnne Visnauskas, and the RIOC Board of Directors for this humbling opportunity. I look forward to enhancing the quality of life on Roosevelt Island and providing exceptional service to the community that we serve.”

Mr. Haynes brings to the role more than two decades of experience with 10 years of executive level expertise and 16 years of overall management acumen. Previously, Mr. Haynes served as Chief Operating Officer at the Housing Authority of DeKalb County in Georgia, where he oversaw all agency operations, strategic and operational initiatives, as well as the executive management team.

Under his leadership, the Housing Authority was able to transform underperforming departments into high performing ones, based on measurable key performance indicators and compliance audits. He received a Bachelor of Arts degree in Sociology from Hampton University.